Join us for a new tradition this holiday season! From December 2, 2021 through February 1, 2022 – explore Golden Gate Park each night to discover an illuminated and enchanting journey that the whole family can enjoy.

Explore Winter Lights in Golden Gate Park by making your way from ‘Uncle John’s Tree’ at McLaren Lodge to Entwined in Peacock Meadow. Continue your journey from the glowing Conservatory of Flowers to illuminations at the 8th Avenue gateway to the Music Concourse. As you move towards the SkyStar Wheel, you’ll swiftly enter The Alterverse, a celebration of poetry and light where you can catch free performances at the Golden Gate Bandshell throughout the holiday season. 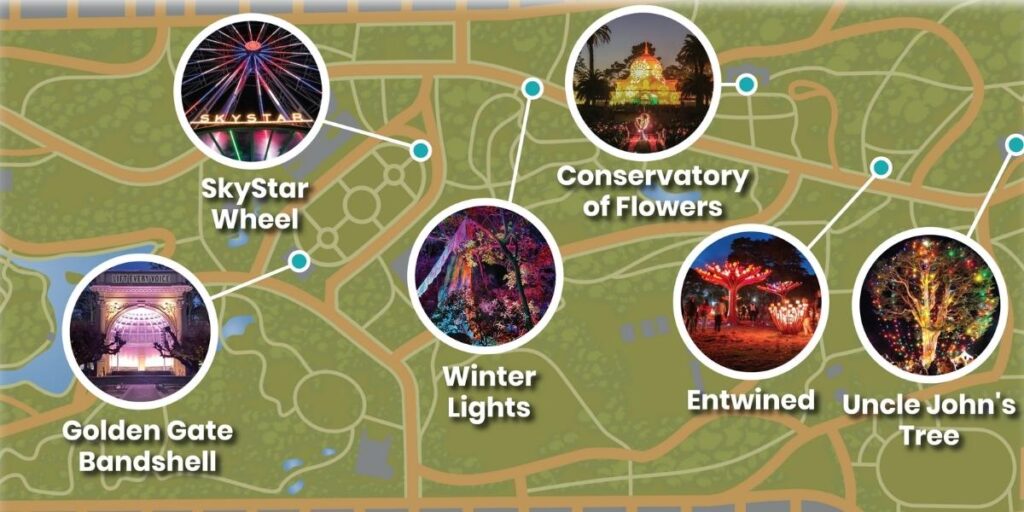 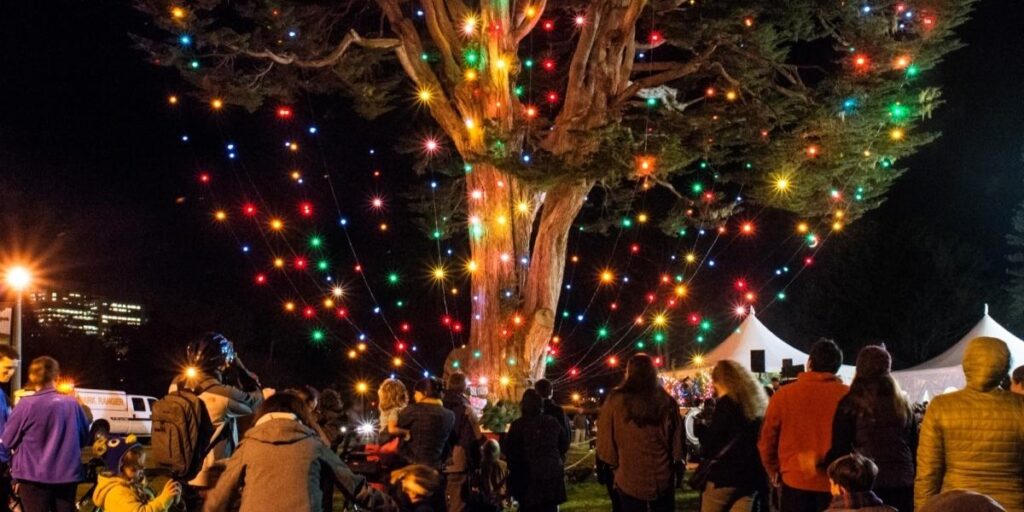 Starting December 2, celebrate the holiday season with a visit to Uncle John’s Tree in Golden Gate Park. Located directly in front of McLaren Lodge, this annual illumination is a San Francisco tradition that you don’t want to miss!

In its second year, this popular light installation will again transform Golden Gate Park’s Peacock Meadow into an enchanted forest of otherworldly shapes and ever-changing light! Entwined, from local artist Charles Gadeken, allows viewers to explore the installation’s twisting paths, sit under colorful trees, and admire nature-inspired sculptures that flower with light. From December 2, 2021 through February 1, 2022, stop by Peacock Meadow to experience the installation before it’s gone. 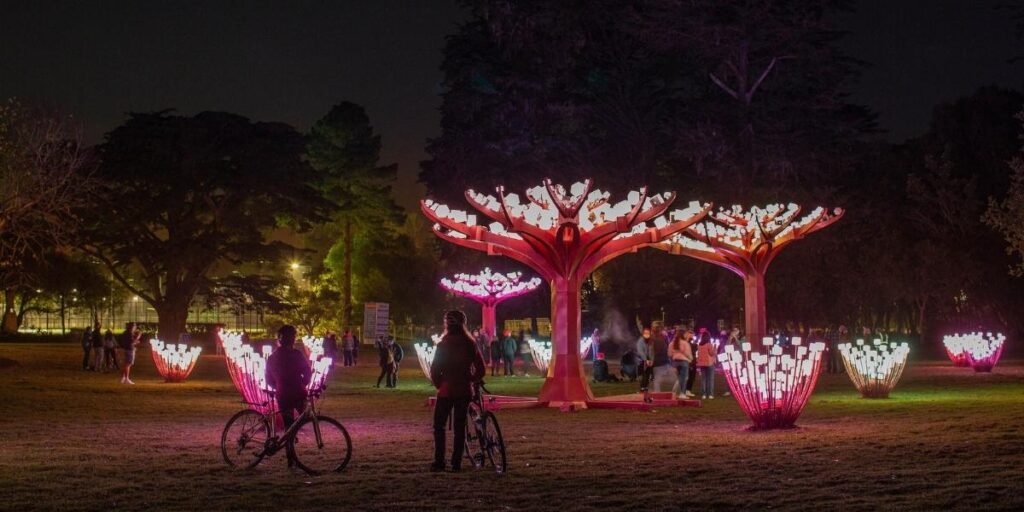 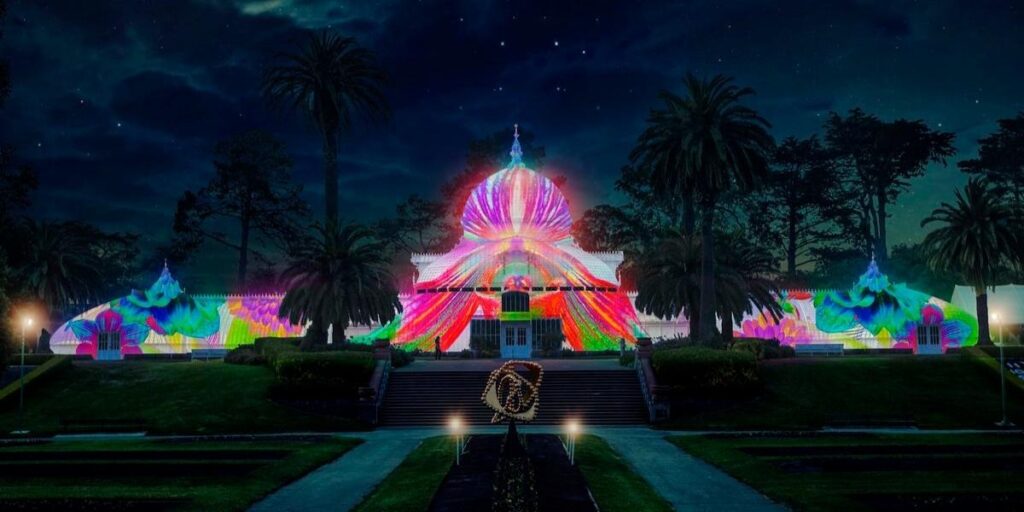 This colorful illuminated projection on the Conservatory of Flowers harkens back to San Francisco’s infamous Summer of Love. Stop by to see this joyous, psychedelic installation complimenting the endless parade of rare and unusual flowers on display inside the Conservatory of Flowers. Enjoy the lights each night, and arrive early for a visit to this historic institution!

Each night, the woodlands of Golden Gate Park will be transformed into illuminated sculptures that glow with the movement of colorful ambient light. Hundreds of individually controlled LED flood lights create dynamic patterns that are programmed to flow across an acre of the park. Located by the 6th Avenue Skatin’ Place, designer Joshua Hubert invites you to skate and dance long after the sun goes down among the trees at Winter Lights. 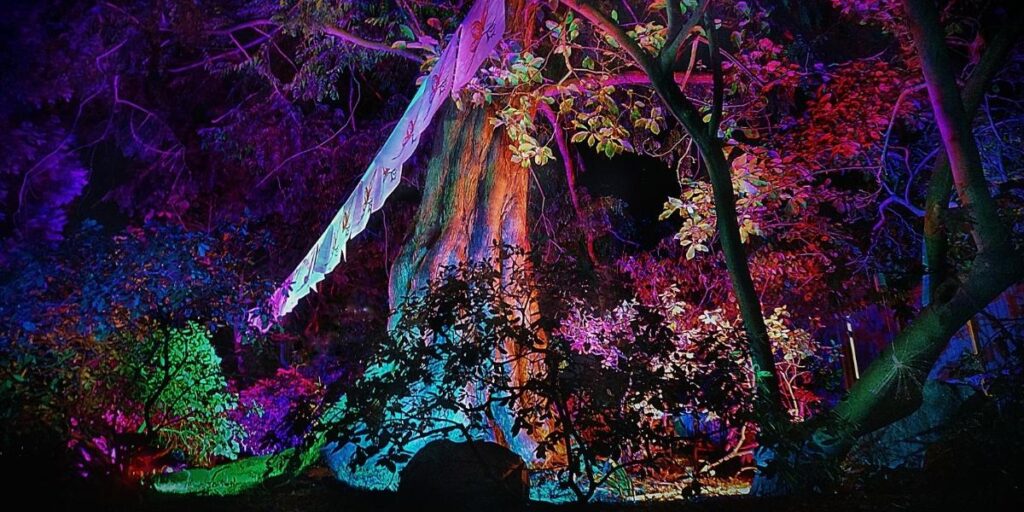 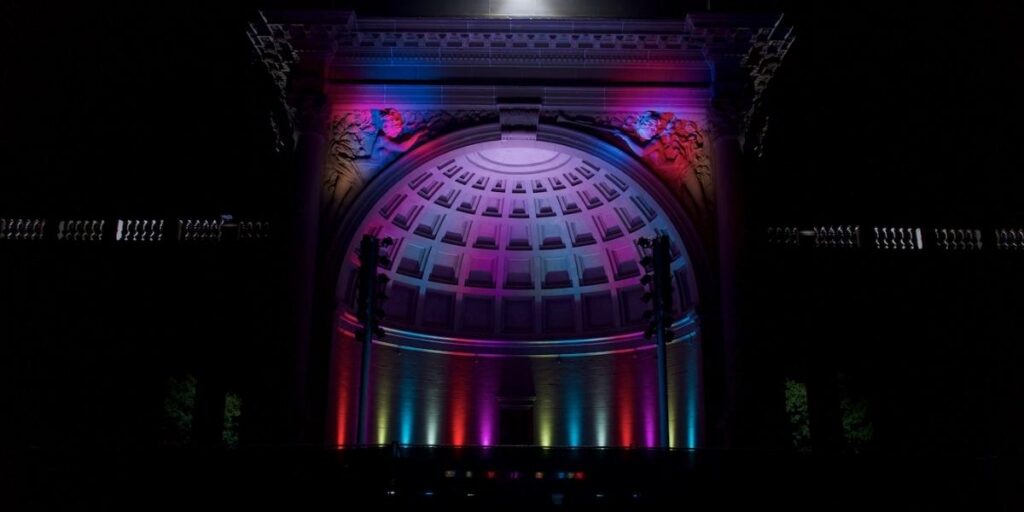 For the entire month of December, the heart of Golden Gate Park will be alive with poetry, live music, and light! The Alterverse, the brainchild of Illuminate, will feature San Francisco’s dynamic Poet Laureate Tongo Eisen-Martin, a curatorial crew of poets, and live music accompanied by mesmerizing light exhibitions – including 450 feet of scrolling poetry lasered on the facade of the de Young Museum. All events in The Alterverse are free and open to the public.

Standing 150 feet tall in Golden Gate Park’s Music Concourse, the illuminated SkyStar Wheel boasts unparalleled views from downtown San Francisco to the Pacific Ocean. This is the first time an observation wheel of this scale has operated in the City since Golden Gate Park hosted the Midwinter International Exposition of 1894. Tickets are available at skystarwheel.com. 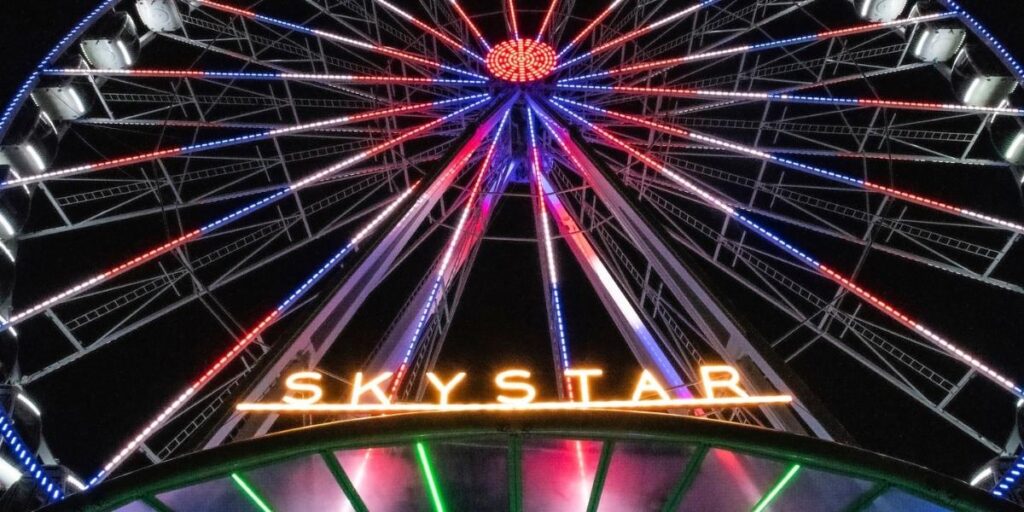 All accessibility information and details for Winter Lights can be found here.

Thank you to our incredible partners at the San Francisco Recreation & Park Department and Illuminate.

The Artist Behind Entwined: Charles Gadeken

Skilled in manipulating metals, Charles makes copper, bronze, and steel pieces of varying dimensions and functionalities. Inspired by the objects, structures, and processes in the world around us, his art depicts natural objects in fantastic ways and realizes the potential for serendipity in everyday life. He often incorporates and develops technology for various effects in many of his projects—LEDs, flame, hydraulics, and electricity to increase the work’s visual and physical impact. These effects instill a sense of joy, wonder, amazement and play into the environment.

Focused on engaging the imagination in the objects created and the method of their creation, Charles dedicates his work to increasing artistic community and public awareness of art. Many pieces are interactive, encouraging spectators to become participants in the artistic experience. In addition to making art, his artistic practice encourages others to do so and has inspired hundreds of people to participate in art-making for multiple projects. Charles also aims to create public art that contributes to and celebrates the community and increases public interest and connection to the place and region.

Light Up The Night: Bike Parade in Golden Gate Park

Sign up for our monthly newsletter with fun events and news all about San Francisco parks and open spaces.