Alta Plaza Park in San Francisco’s Pacific Heights neighborhood is one of the City’s most treasured gems. Its transformation from a squatters’ haven to one of the City’s most acclaimed and beloved parks was a tumultuous one. The State Supreme Court eventually awarded its 12 acres to the City in 1888. The park once served as a quarry and even housed disabled horses. In 1900, John McLaren of Golden Gate Park fame designed its iconic graded terraces. Known for its expansive lawns and breathtaking views, families from every neighborhood and tourists visit the park daily.

In 2014, park advocates hosted a series of community meeting to develop a Master Plan by Miller Company Landscape Architects, approved in 2016 by the Parks Commission. 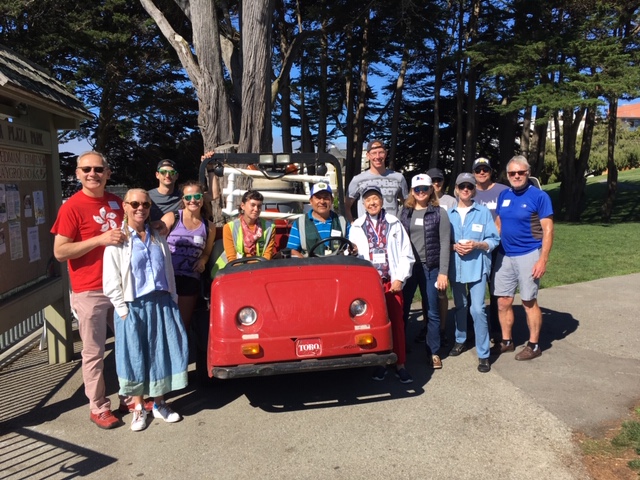 Continuing the advocacy of its founders, a new FOAPP board is striving to implement the Master Plan starting with solar lighting and concrete pathways. While design and construction cost estimates are developed, funding sources are being researched and a capital campaign will be launched to achieve these goals. Your tax-deductible donation will help ensure the launch of this ambitious project!

The Friends hold quarterly Clean & Green volunteer days the second Saturday of March, June, September and December, along with an Annual Fall Harvest Festival, and plan more community activities throughout 2020. They welcome volunteers to help out with these fun events. Visit their website and sign up for announcements and their monthly newsletter.

The Friends have partnered with SF Parks Alliance and the San Francisco Recreation & Parks Department for well over 15 years. Working tirelessly to improve and beautify Alta Plaza Park, they have launched major capital campaigns to fund infrastructure and beautification projects, and we greatly admired their continued work in the park!

Send a check payable to the SF Parks Alliance with “Friends of Alta Plaza Park” noted in the memo section to the following address, or donate directly through the link below: