Friends of Esprit Park is a neighborhood organization dedicated to supporting Esprit Park as a multi-use, community enriching green space.

Esprit Park was initially developed in the 1980s as a private park for the employees of the Esprit de Corps company – which had the first modern office campus. At the time, the company had 300 employees and Dogpatch had about 200 residents. The park was open to the public and was maintained and landscaped by private gardeners. The original landscape architect for the project was Drew Detsch, a founding member of Friends of Esprit Park and an active consultant on the upcoming renovation of the park.

In 1996, Friends of Esprit Park was founded to advocate for the protection and preservation of Esprit Park as a green oasis in the urban fabric of San Francisco. Esprit de Corps shut down operations in Dogpatch and the park’s future was unknown. The City of San Francisco was reluctant to add another park to maintain, and developers were interested in building on the land. Fortunately, neighbors banded together to save the park and with Mayor Brown’s support, the city agreed to keep Esprit Park.

Since then, Friends of Esprit Park has played an active role in community engagement, ensuring that the voices of the people who love Esprit Park are always heard and taken into consideration. The current board of Friends of Esprit Park was active in advocating for and raising $7.4 million to give Esprit Park a much needed makeover. The group welcomes you to join them and help keep this gem in Dogpatch a welcoming, green space for everyone to enjoy. 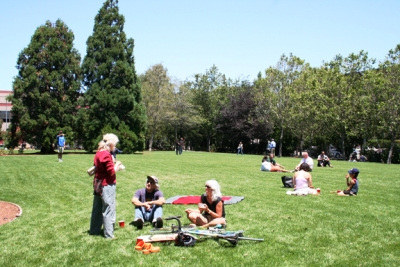 There are a multitude of ways that neighbors can get involved with Friends of Esprit Park:

The group’s Volunteer Gardeners get their hands dirty, pull up weeds, and spend time outdoors getting to know their neighbors. The Advocacy Team dedicates time to working with neighbors, city officials, and the Recreation & Parks Department to ensure that Esprit Park and its users are always represented. The Community and Events Team plans everything from happy hours and bake-offs to fireside sessions with the District Supervisor to bring the neighborhood together and keep everyone involved in Dogpatch. Lastly, you can’t forget the little ones! The Kids Team hosts events geared towards the youngest residents of Dogpatch, like fairy story hour or an exploration of the bug and bees at the park with the group’s very own resident bug expert.

Be sure to check out the group’s website to learn more about how you can get involved!

At just 1.8 acres, Esprit Park has a small footprint but is full of personality and adds charm to the Dogpatch neighborhood!