The Glen Park Greenway is a green corridor that runs through the heart of the Glen Park neighborhood, connecting Glen Park’s transit hub and urban village to the many recreational opportunities throughout Glen Canyon Park.

In the 1960s, the political activism of local women stopped the construction of the Crosstown Freeway through this corridor. This produced abandoned open space that the community has since adopted as a useful pedestrian route from the Village to Glen Canyon Park. Initially, the space was overgrown and a site of unwanted activity. However, in 2012 the Glen Park Association proposed a remediation project, built community consensus around a concept plan, and achieved designation of The Greenway as a Street Park.

The Greenway links a growing system of nature trails in the Bay Area: the Creeks to Peaks trail, which connects to the iconic summits of Twin Peaks; and the Crosstown Trail, which connects Candlestick Point (SE San Francisco) to Lands End (NW San Francisco). The Greenway is also considered a spur of the Bay Area Ridge Trail, connecting at Twin Peaks.

The volunteers of the Friends of the Glen Park Greenway continue to actively work to enrich the natural habitat of the Greenway, improve the trail, and add a little joy to the heart of Glen Park! 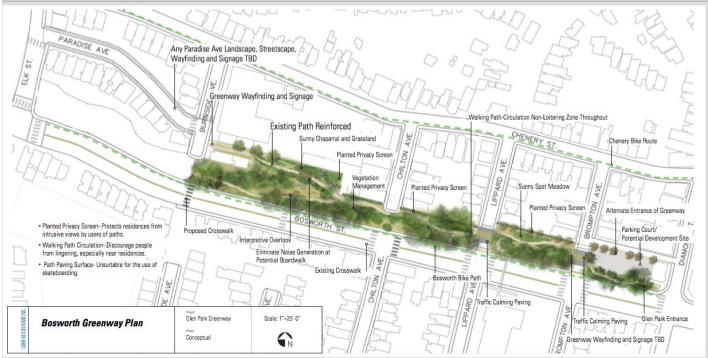 To learn more about this group and their work on the Glen Park Greenway, be sure to visit their webpage and get involved!

Some of the most active and prolific volunteers… this group has turned vacant City land into a well-loved greenway corridor for pedestrians, dog walkers, strollers and hikers to enjoy.

Send a check payable to the SF Parks Alliance with “Glen Park Greenway” noted in the memo section to the following address, or click on the donate button below: