For a long time, Annie and Matt wanted to clean up and beautify the Mariposa Street off-ramp leading onto Pennsylvania Avenue. They wanted to make it a relaxing and safe place for all people and animals to enjoy. As a result, the two decided to start a garden in late 2008.

After almost a year, the garden’s layout was set, and officially named Pennsylvania Garden (PG). Annie and Matt completed nearly 1,000 hours of heavy, backbreaking work. The vast majority of plants were planted. At that point, all of the plants were chosen and paid for by Annie and Matt. This required many blister-inducing weekends and late nights of digging in various gardens throughout the Bay area. With the addition of many donations from neighbors, the garden was starting to look established. However, the cost continued to escalate.

Fortunately, with the help of volunteers, grant proposals were written for the group, now called Pennsylvania Street Gardens (PSG). Since then, the garden has acquired funds to cover hardscape improvements. A few years later, Annie and Matt moved a block away down the hill. They realized the entire street they were now on needed a similar facelift, and so Pennsylvania Railroad Garden (PRG) was born. 23 trees and 850 plants were planted within 2 years, and a sidewalk and retaining wall were built.

What’s growing here? Pennsylvania Street Gardens grow xeric ornamentals. The plants are nearly all native species, or drought tolerant when established, so the garden doesn’t need to be watered much. PSG’s mission is to show that you too can have a lush garden with little to no water use!

Over the years, as the plants grow and fill out, the team hopes this work will improve Potrero Hill, distract the eye from the freeway view, provide habitat for wildlife, teach people about plants and gardening, and most importantly: provide a peaceful and beautiful meeting place for people in the community. 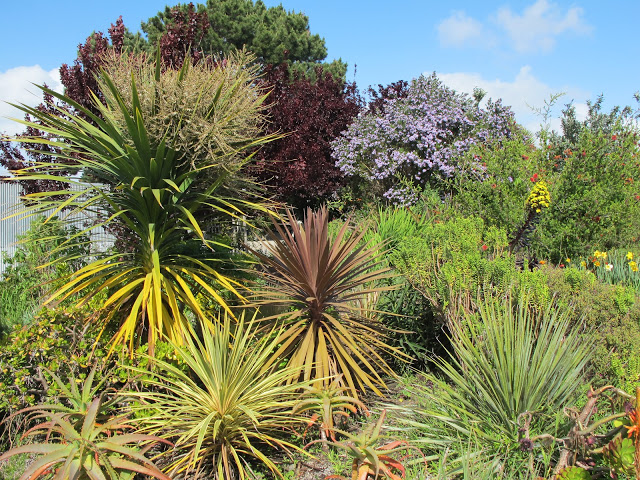 The group meets on the first Saturday of the month from 10am to 12pm to work on the garden. They welcome you to join them, and will provide tools, gloves and drinks. Everyone is welcome!

To learn more about this group and how to get involved, visit their website or contact Annie at annie@psgsf.org.

Note that their website lists all of the different genera of plants in the garden. You can also find a weekly “”Plant Profile”” there, giving more details on a species or genus of plants you can see in the garden, to help you grow them too.

This group stewards one of the most incredible and inspiring community gardens in the Bay Area, and does so right next to a freeway!

Send a check payable to the SF Parks Alliance – with “Pennsylvania Street Garden” noted in the memo section – to the following address, or donate directly through the button below: