The Pioneer Park Project is a citizen volunteer group that has been working with San Francisco’s Recreation and Park Department since 1997. The group became fiscally sponsored by SF Parks Alliance over 14 years ago, and focuses on improving and maintaining the landscape surrounding Coit Tower.

Located at the top of Telegraph Hill and most notably known as the site of Coit Tower, Pioneer Park was established in 1876 as a celebration of the United States Centennial. The site was purchased by a group of businessmen, including George Heart, in 1876 for $12,000 in an effort to preserve the site, since hilltops during that time were often converted for commercial use. The group then donated the land to the City on the condition that it would remain green space and be named Pioneer Park, after the hill’s first residents.

Coit Tower was not built until 1933, when a $100,000 bequest was left to San Francisco by Lillie Hitchcock Coit. Nowadays, tourists and locals alike frequent the park for its breathtaking views and Coit Tower’s historic murals. 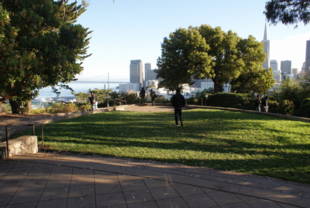 To learn more about the Pioneer Park Project and get involved, reach out to the group via email or donate here.

This group has actively worked to improve and maintain the landscape surrounding Coit Tower since 2009, and we can’t thank them enough!

Send a check payable to SF Parks Alliance – with “Pioneer Park Project” written in the memo section – to the following address: