As City Guides grew, the group became a program of the San Francisco Public Library. Tours moved beyond the confines of City Hall, and the organization became recognized as the official docent of San Francisco.

City Guides volunteers are serious about sharing the fun of discovering San Francisco and its diverse neighborhoods. They continue working to preserve and perpetuate the history and folklore of San Francisco, and to celebrate the city’s rich history of cultural diversity. In the spirit of the San Francisco Public Library, the group continues to provide all services free of charge. 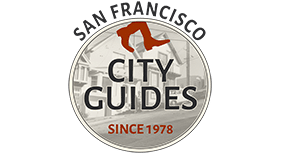 To learn more about San Francisco City Guides and how you can get involved, check out the group’s website which details how you can become a member, a sponsor, or a guide. You can also find all upcoming tour dates and locations here!

Started in 1976 by the well-known San Francisco librarian Gladys Hansen, City Guides now has over 300 volunteer guides who lead over 80 different tours… a “must do” activity for locals and visitors alike!