In the late summer of 2008, a group of neighbors living near the intersection of Athens and Avalon Streets began to talk about turning the hillside at their intersection into a garden. The area had long been a place where people threw their garbage, old furniture, and bags of junk. The steps running up the hillside were a graffiti spot and old cans of house paint had been spilled and left to dry on the steps. The vegetation on the hillside consisted of overgrown scotch broom, invasive weed species, and non-native grasses. Overall, it was a constant mess.

One neighbor investigated the ownership of the hillside and discovered that it belonged to the City of San Francisco. It is, in fact, the unimproved block of Athens St. between Avalon and Valmar Terrace. When asked about the possibility of turning the hillside into a neighborhood garden/park, neighbor Ahsha Safai connected the group with DPW and SF Parks Alliance: and so the project was born. The project became part of the Street Parks program; and another helpful gentleman, Peter Vaernet, of Brooks Park, encouraged the group to contact Seth Wachtel at USF to have the project introduced as a city planning project in his course at USF. This brought a new and energetic group of young planning and architecture students to the site. They did the first set of drawings for the hillside in the fall of 2008. After being elected District 11 Supervisor in 2008, John Avalos committed $10,000 in PUC funds to help the project get rolling.

The group of involved neighbors organized meetings with the students and invited neighbors by distributing flyers to all surrounding blocks. The group continued to grow in size to what it is today, a group of about 120 supporters. Starting in September of 2008, the group met on the first Saturday of each month to clean up the hillside. They held several large community meetings to get input on the design, and to address any concerns from the neighborhood. A final set of drawings was settled on in March of 2010.

DPW Engineers have since created a terrace system using low retaining walls which curve around the hillside, allowing for a small gathering area near the bottom, a smaller flat area near the top, and extensive terraced beds which will hold drought tolerant native plants. 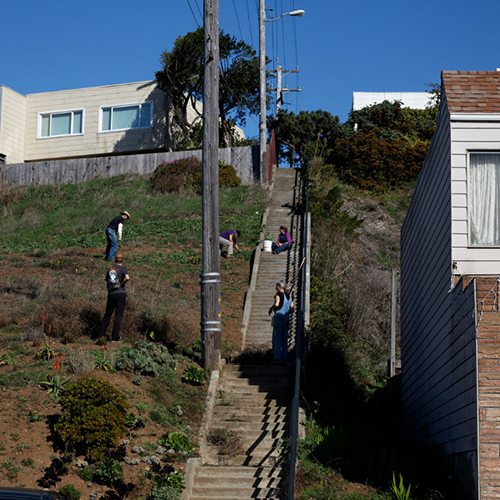 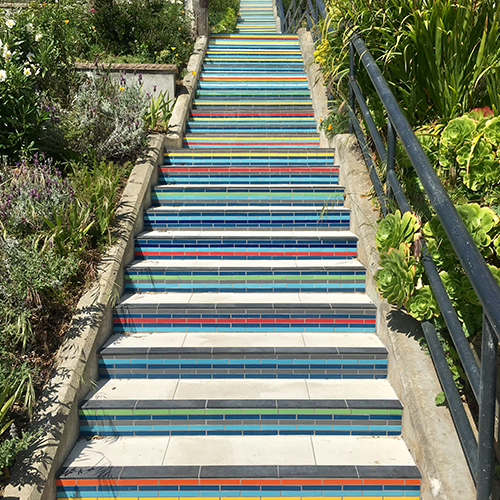 Check out the group’s Facebook page for ongoing updates and to learn more about how you can get involved in neighborhood volunteer days and more!

This group of dedicated neighbors turned a hillside eyesore into a beautiful landscape and tiled stairway, and we couldn’t be more impressed. The inspiring space is a must see!